Wait.  Sorry...that should read, "Happy Birthday Ivan, and Superman's Girlfriend."  Like so much of the hoary Mainstream Media, Wo'C has been forced to layoff most of our proofreaders, editors, and copy boys, until now our once bustling newsroom is empty, save for a pile of surplus green eyeshades and sleeve garters, while the street corner outside is cluttered with unemployed urchins in short pants, morosely pitching pennies as they take turns gnawing on a single stale corn dodger.

But the important thing is, today is the natal anniversary of our old friend Ivan G. Shreve, Jr., the blogger behind the always funny and informative Thrilling Days of Yesteryear, a columnist for Radio Spirits, and some sort of New Media guru for ClassicFlix.  And judging by the many actresses he has dubbed TDOY "goddesses" (not in the Charlie Sheen sense), Ivan is also a man with an eye for a comely Golden Age Girl (not a Golden Girl -- at least, I don't think he's got a Farrah Fawcett-style swimsuit poster of Estelle Getty, but I've never seen his bedroom walls), so I alway like to ornament his birthday posts with some period appropriate cheesecake.

The only question is, which Hollywood Hottie will be Miss Afterbirth of 2013?  It's a knottier problem than usual, because as I understand from Facebook (which has a record for factual accuracy only slightly less luminous than the IMDB), this is a Big One for Ivan, birthday-wise, and I've been thinking that I'd really like to do something special.

Then Mary came to my aid when she mentioned that it was also Lois Lane's birthday.  Not today, specifically (according one source her birthday is August 17), but this year marks the 75th anniversary of Lois's debut in the comics, which makes her even older than Ivan.  Now to be honest, the Lois Lane of the comics is my least favorite version of the character, and for much of her four-color history she came off as shallow, shrewish, conniving, and kind of stupid -- in other words, Lucy Ricardo without the henna rinse.  But I have varying degrees of fondness for Lois as depicted on film -- whether hand-drawn, computer-generated, or live action -- and in my opinion, the best Lois was the first Lois: the Lois of the Fleischer Superman cartoons of 1941-1943. 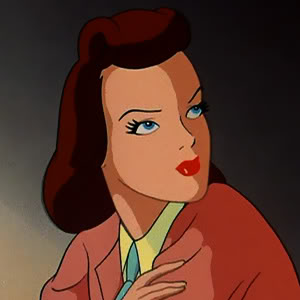 Voiced by Joan Alexander (who also played the part on the long-running Superman radio program, which debuted a year earlier), the Lois of the Fleischer cartoons was a newspaperwoman so full of pluck and spunk she made Brenda Starr look like the Society Page reporter for the East Moline Gleaner.  In fact, this Lois was so brave, brassy, and determined to get the Story -- imagine Rosalind Russell's Hildy Johnson from His Girl Friday chasing scoops about bank-robbing robots or reanimated Tyrannosaurs -- that you could remove Superman entirely and still have a hugely entertaining series.

So with that in mind (and because we're deathly ill and trapped in the House of Crap), I put together a little video to illustrate my thesis:

Now to be fair, I understand there are cases to be made for many of the other Loises over the years, from Noel Neill to Dana Delaney, and I freely admit that the brief (and more recent) clip below may in fact represent her finest moment:

So in the spirit of a Golden Age Goddess who stood up to the Bulleteers of Yesteryear, and remains unafraid to flip off the Brainiacs of today, please join me in wishing Ivan a very happy (redacted round number) birthday!  And tell us who was your favorite Lois Lane?
Posted by Scott at 1:51 AM

Happy birthday, Ivan! I actually kind of feel like I should wait a few days just so Doc doesn't feel bad.

It's a great day to spend drunk, but then what day isn't?

Happy Labor Day to everybody. I have no views on Lois Lane, never having been much of a superhero chick, but I can offer my opinion that Bruce Springsteen is no Pete Seeger.

Fleischer-era Lois, without a doubt. She was never more beautifully animated.

I felt kinda odd about adding my "Happy Birthday!" in the Doc Logan thread. Not because I have something against birthdays or Doc -- anyone who might be working on killer robots and atomic Zeppelins as part of their fiendish plan for world conquest is ok in my book. It's just that being a new arrival in these here parts, I thought it might come off as insincere.

So "Happy B-day!" to Ivan and a belated best wishes to Doc Logan.

Thanks for reminding me Ivan's on Facebook (& a Facebook friend) I went there & congratulated him personally, right on his wall or whatever they call it.

(Hope both you sufferers are feeling better: Think of the poor cats!)

Seriously, when I look at the TDOY site, I wonder at the stamina.

Long may you write, and many more birthdays to you!

Happy birthday, Ivan! It may be your birthday, but I get the present, apparently, as I get to browse through the TDOY archives, this looks like FUN.

Also, thanks to everyone who wished me a happy birthday, As birthdays go, it was a good one. Seeing that my favorite place on the web remembered me was probably the best thing about it.

Happy birthday Ivan and just think: your birthday girl may be a celluloid creation but she's still more lifelike than Ann Coulter.

In the tradition of Things Past, let me wish you a belated happy birthday, Ivan!

Not to diminish the celebration of Ivan's trip around the sun (ta-da!), I'd be remiss not to commend Scott for a really cool edit of the exploits of Lois Lane from the early days.

Thanks, Chris, I appreciate it.