A Child's Christmas In Crazy Town

Now that it's December, it's time to start planning your War on Christmas in earnest. I suggest bypassing the overdone, stringy Bill O'Reillys, and seeking out the more piquant, artesian wingnuts, like Laurie Roth. Here's a little number she called:


Americans must attach themselves to the power of Christmas to win

We find ourselves lost yet again in the land of Christmas absurdities. One school near Boston almost cancelled students seeing the famous "Nutcracker" due to the possible damages of being exposed to a Christmas tree.

I just knew that Laurie would hop right on the War on Christmas bus with Squirrely Joe!


Prepare your mind for other moronic cocktails.


We are already seeing the atheists rise up, squealing like pigs that have lost their bacon.


In my high school in Walla Walla, Washington, I was told to paint some Christmas scenes on the windows. I was known as the school artist. No one told me what I couldn't paint, so I did a lot of different themes reflecting Christmastime. The hammer came down just as soon as I was done. I was ordered to promptly erase all the bells, manger scene, and even Santa Claus. This was all due to the special needs and rights of the few atheists on campus.

I'm not positive, but I think this is one of Laurie's scenes: 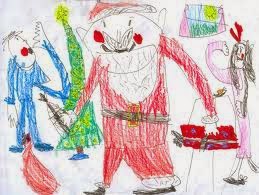 I am hideous with math but even I can figure how the progressives and anti-God folks add things up. At Walla Walla High school there were two atheists with all the rights and 600 students who wanted Christmas scenes of all kinds painted on the windows, and we had no rights.

But let's let Laurie speak for a minute without interruption, and I think we'll see she's not as loony as I have been portraying her.


Christmastime reminds me yet again of the progressive and Obama math – all on Obama's side and zero on "the peoples" side. The masses in America are to only get what poser-Obama will allow to cross the line as a reward to us and that is only if we obey and worship him and his agenda.

This season Obama and his progressive sellouts handed poison and moldy dog bones across the line to us, hoping that we would all think it was yummy cake and take a big bite. We didn't, and stuck the cake back in his smoke-stained mouth. Obama has yet to understand the unbelievable and historical pushback of these midterms.

We gathered up all of Obama's moldy toys, threw them back in his sandbox, and said, "Bite me." Obama continues to bite all right, with his illegal amnesty bomb, laced with his "know it all" attitude. However, his biting now feels more like a toothless 95-year old trying to rip through Jell-O.

Um, let's just walk away with the mental image of moldy dog bones thrown into the sandbox, with President Obama telling Laurie to bite him, while Bill Cosby offers her drugged Jell-O that she can't rip through, because in this dream, she has no teeth.

Merry Christmas from Laurie.
Posted by s.z. at 2:58 PM

The thing that always puzzles my poor liberal mind about these rightwing glamor girls, is how they manage to be so full of bile that they can dependably come up with surging floods of really nasty imagery like this -- and yet they take such cheery photographs?? Here's me, all kindly and humane, and hardly ever inviting anybody to bite me, and I'm almost completely non-photogenic. Unfair!

Of course, there's always Coulter. She always had that mean, bone-scraping look to her IMO, even in her palmy days when she was dazzling sex-starved conserva-men with her perennial black cocktail dress.

Being a conservative woman is No Picnic!

Look at their men!

A nice woman would never survive: it takes gall and venom and malice, and a heapin' helpin' of choler. Just like the conservative guys, only like in "Thru the Looking Glass", the wimin has to run twice as fast (be twice as mephitic) to get anywhere.

(Oh HOW I love my Thesaurus!)

600 students who wanted Christmas scenes of all kinds
...especially the bells - don't deny us the bells!

Out, foul atheistic demons! The power of Christmas compels you!

I like the image of artesian wingnuttery, too. Ms. Roth certainly came up with one hell of a frothy spew.

Is it just me, or do you think she's taking writing lessons from Swank? OK, it's not quite that crazy, but there's something about the tortured metaphors and non sequiturs that reminds me of the master.