Merry Christmas and a Happy Inquisition 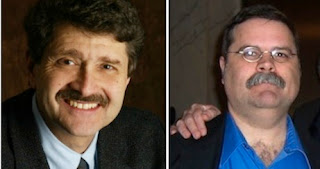 It's been awhile since we looked in on radio scold Michael Medved, largely because his wife, Dr. Diane Medved, has been much more entertaining, what with her dedication to treating the PTSD of monied matrons scarred by the sight of hobos in Hawaii.  As a result, we missed the news that pundit and oatmeal spokesman Warner Todd Huston drummed Michael out of the Right Wing, in a ceremony similar to the opening credits of Branded, in which a U.S. Army officer strips the epaulettes and brass buttons off Chuck Connors' Cavalry uniform, except it's hard to picture either Warner or Michael actually serving in the military, so it's actually more like that scene in I Love Lucy when Lucy and Ethel wear the same outfit to a charity talent show, and wind up ripping the bugle beads and ruffles off each others gown while warbling a duet of Cole Porter's "Friendship." 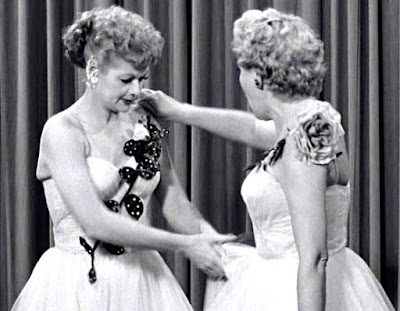 
An Example of Why Radio Host Michael Medved is No Conservative

Michael Medved is touted as a “conservative” radio host from the Salem Radio Network. But just how conservative is he?

I always thought he went up to 11, but perhaps I'm confusing that with his IQ.


One has to wonder with his constant dismissive attacks against any and every conservative politician. But this week he revealed another reason why he is less conservative than he pretends. 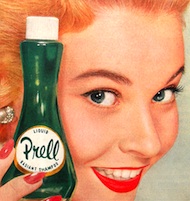 This week's episode of Michael Medved, Secret Beatnik is brought to you by Prell Concentrate, and new Liquid Prell.  It leaves your enormous mustache Radiantly Alive™.


Medved started his political life working for the Kennedy’s in the 60s, so like many young people he started out as a liberal. But from his radio show yesterday it seems pretty plain that he never really turned the corner from a big government liberal to a true conservative.

I can't wait to find out which crime of Wrong Think Michael committed.  Perhaps he enabled Moocherism by dropping a quarter in the honor jar next to the coffee maker in the radio station break room.


He obviously still has a ton of far left beliefs in the wondermentatudenousness that is government.

You can tell Warner has been reading Hayek in the original German, because his compound nouns are really coming along nicely.


The subject of Obama’s tax on the Christian Christmas icon, the Christmas tree came up on his Tuesday radio program. Obama floated the idea that a 15 cents per tree federal tax should be put on Christmas trees this year to fund another bloated boondoggle government agency.

No...really, Warner?  Seriously?  Hoo boy, this is even better than I'd hoped.  Not only is the insufferable Michael Medved getting attacked from the right, but he's the victim of an archetypal wingnut smear.


It seemed like a simple little idea. The Christmas tree industry, which has been struggling in recent years, wanted to fund a promotional program, encouraging consumers to buy real, rather than artificial, trees over the holiday season. The idea was for Christmas trees to follow in the footsteps of milk, beef, and cotton, all of which benefited from successful promotional campaigns.

To pay for the effort, the industry launched the Christmas Tree Promotion, Research and Information Order, asking the Agriculture Department to approve a 15-cent fee, per tree, on domestic producers and importers. It was requested by the industry, to benefit the industry, and to be paid for by the industry.

In other words, it's not a "tax," and it didn't original with the Obama Administration.  An industry trade group asked the USDA to approve a "check-off" (basically an assessment on the industry by the industry) to fund a private-public promotion and marketing campaign designed to encourage consumers to buy real Christmas trees (rather than the artificial trees they increasingly prefer).


Examples of other agricultural commodity Checkoffs include the egg, beef, pork, mushroom, milk, and honey, etc. industries. We're all familiar with the Dairy industry's ad campaigns; "Milk Does a Body Good" and "Got Milk." "Pork: the Other White Meat," "Beef: It's What's for Dinner" and "The Incredible Edible Egg" are recognizable slogans developed and funded by Checkoff programs. These four 'big guns' collect between $45 and $91.2 million in assessments annually.

Funding for promotions and research comes from within each industry.

However, the Heritage Foundation issued a shrieking denunciation of a thing that isn't happening, which was picked up, of course, by Drudge, and that was good enough for the Gateway Pundit.  Eventually, it dripped down the inseam of the right wing blogosphere until it finally puddled in Warner, who I like to think of as the comfortable old shoe of wingnuttia.

But while the others tut-tutted about governmental overreach, Warner took the whole thing very personally, to the point of swearing out an indictment against one of the higher profile members of the tribe for high treason in the War on Christmas.  Perhaps because Medved isn't really a member of the tribe...


Michael Medved reveald his complete unconcern over this intrusion of the federal government on our Christian holiday.

Medved, like Dennis Prager, is not shy about professing his Orthodox Jewish faith, so either Warner is incredibly tone deaf, or he's trying to make a point of some kind here...


He argued on his radio show that this tax on Christmas trees is no big deal because it’s “only fifteen cents per tree.”

Of course a principled conservative would be against this idiotic tax even if it were but one penny per hundred trees!!

This reminds me of the way David Arquette's character in Ready to Rumble reacted to any suggestiopn that WWF matches were staged managed, by screaming, "Wrestling's not FAAAAAAKE!"

So since it's a voluntary assessment proposed by the industry itself, I assume Warner either doesn't know what a "tax" is, or he is vehemently opposed to trade group advertising campaigns on principle, because they reek of Stalinist collectivism.  I imagine him glowering at his TV, his voice rising in volume and pitch every time another one of these commercials came on: "Got Milk?  Got bullshit!...Pork: the Other Bullshit Meat!...Beef?  It's what's for BULLSHIT!"

The FDA has been organizing these campaigns for decades, and seems to have no difficulty coordinating the efforts of huge industries such as beef and dairy, but it's clearly going require the creation of a new government agency and a massive, Manhattan Project-sized effort to promote these seasonal holiday decorations.


As they say, there is nothing so permanent as a government program and this one would be just another government boondoggle that would grow and grow until it cost us billions a day like so many other useless government agencies.

Yes, the Real Christmas Tree Awareness Program is destined -- some would say doomed -- to become the next Social Security or Department of Homeland Security.  Certainly we've been living under the National Egg Board bootheel for most of our lives.  But I'm curious -- how is this going to "cost us billions," when the money comes from Christmas tree producers (and the beneficiaries of the program) themselves?  I suppose you could say "they'll just pass along the cost to consumers," but that's true of every advertising campaign (who do you think bought those pearls the silken-haired models were always plunking into bottles of Prell shampoo?  You, Comrade!), and of course, to avoid paying this "tax," you can simply forgo the purchase of a Christmas tree, which most people are doing anyway, which is why the tree farmers want the USDA to pimp their product in the first place.


Worse, how long would it be until this new unnecessary government agency would begin to ask for more money and more powers over Christmas with the faux justification that it is promoting it?

How long before we have a Cabinet level Department of Christmas?  (I have to admit that the idea of, say, the Undersecretary of Yuletide Affairs attempting to gain "power of Christmas" sounds like a 30-minute holiday classic just waiting to happen, and I sincerely hope Rankin/Bass will get right on that.)


That Michael Medved doesn’t see this and isn’t concerned about birthing another wasteful government agency and giving this agency new controls over our lives, well it pretty much shows that he — admittedly once a liberal — never really did become a true conservative.

Maybe Michael thinks that just because he's Jewish he'll be exempt from service to the USDC, and won't be forced at the point of a Wham-O Air Blaster to toil in their underground tinsel caves. 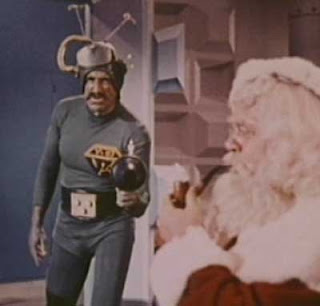 Apparently you do, Warner.  And the supply must be drying up if you've actually sunk to cooking Michael Medved in a spoon.
Posted by Scott at 12:08 AM

I wonder how it is that these Commie-haters sound so much like...Stalinists?

Idolators and pagans! Enflaming idols under every green tree! (Including the one that holds the mortgage on my mobile home.) The tree has nothing to do with christmas, Jesus was born in a desert, the tree was co-opted from Celtic and Nordic folks, and therefore Huston, by fighting to keep the tree tax-free, is pretending to be Christian but is showing his Pagan colors. If he undoes another button on that shirt I bet you'll see a pentagram hanging from a chain or something equally creepy. Stay alert, folks, these impostors lurk around every corner!

Just what the world needed, another hectoring scold to admonish people to be bigger jerks. Warner isn't satisfied with the quality of another troll's ignorance and divisive propaganda. Boo hoo

I find the pork council's "Were the other white meat mutherfuckers!" (paraphrase) ads anti-Muslim, anti-halal, antisemitic, anti Arnold from Green Acres and more than a tad racist. Who's with me on this?

Plus, it implies that there are only two kinds of white meat -- poultry and pork, a culturally insensitive statement with overlooks -- if not excludes -- the dietary staple of the title characters in The Walking Dead. So it's kind of anti-zombie, too.

As well as Albino-Americans: The extra very white meat.

What the hell...a Cease & Desist Letter from Edgar Winter...?

Well, if it's any far-too-belated help, Scott, though I can't imagine how it could be --- I've actually WATCHED that horrid "Santa V. The Martians" or what-the-fuck-ever-it-was piece-of-shit, horribly-colored "movie."

Granted, the narcotics distract me from the pain a little bit on occasion, but I still feel it.