Post-Friday Beast Blogging: The Happiness is a Warm Utensil Edition

Traditionally, winter is the time when Randian Ants get to tell Looter Locusts "I Told You So" and "Suck it" -- pretty much in that order.  But it's also a time of feline rapprochement, for as the temperature drops, the minor squabbles over toys, territory, and food bowl protocol tend to be set aside in the greater interest of cuddling on the couch.  It's much like the ecumenical spirit which thrives amongst the world's great faiths during this holiday season, although so far the Pope has successfully resisted the impulse to spoon the Jews. 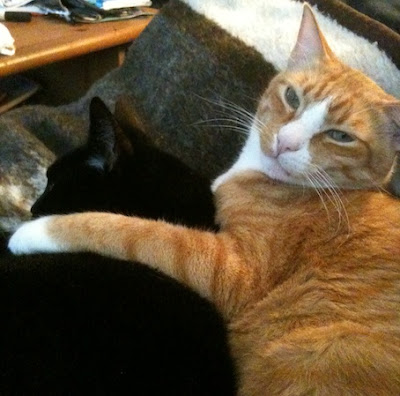 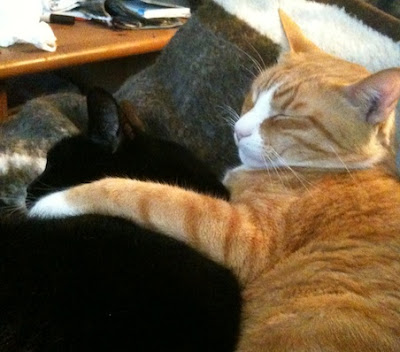 Moondoggie:  I swear, if you don't put that camera down, I'm gonna sue you for harassazzzzzz..."
Posted by Scott at 2:23 AM

Dooooooood... I am SOOOOOOOO coming back as one of your cats in my next lifetime, which will hopefully arrive before I finally DO figure out how to lug my fat ass up onto the roof of JAX brewery with a high-powered rifle...

Your kittehs remind me so much of Biddy & Boy when they snuggle like that. My first cat, Simon, *THE* tallest fucking cat in HISTORY, raised my half-pit, half-English-Bulldog genius "little sister," Pookie. There were many, MANY times when he could've offed that spastic, bitey little sociopath puppy and gotten off on "justifiable homicide," but he didn't. He just sighed that sigh and looked at her as if thinking, "When you're big enough to defend yourself, YOUR ASS IS *MINE*!!!"

Anyway, they had almost 10 good years together, and I wish that the comments enabled images, 'cause even though it's the wrong angle and the lighting sucks, there's a 1983/84-ish picture of Pookie & Simon curled up on THE. WORLD'S. FUGLIEST. FUCKING. COUCH. *EVER.* And with their heads resting on one another's flanks, they are a perfect yin-yang.

Sucks that we have to outlive our dearly-beloved furry chirrens, don't it? Maybe I should've saved-up for that African grey parrot, after all

Anyway, surly & admirably-vicious as Her Majesty is, I'm sure that Riley is more than aware of how lucky she is to have Moonie for a snuggle-buddy. Those are two damned happy-looking cats.

(Super-secret decoder-ring security word is "NESSE," as if the worldwide conspiracy to conceal the Loch Ness "monster" {she's a fucking HERBIVORE, for fuck's sake!) and her very existence is finally unraveling at the seams... maybe the IT guys @ the CIA are just fucking with our heads, but you never know...)

My cats are experiencing their first "cold" winter living with me, and it's not even winter yet. I keep the thermostat to my liking, which is closer to low to mid 60's, far cooler than their previous owner. They find hidey places to get as warm as possible, but no snuggling that I'm aware of yet.

Chez chats nous, the heat preferences run the gamut from Outdoor Kitty Stripey, who knows all the cozy spots where dry leaves make insulating banks under the porches, would completely freak if we tried to bring her in, and puts on a double-mink winter coat this time of year ... to Brash Interloper Jingle, a young gent who showed up at the back door 2 yrs ago, and is now weighing his love of the great outdoors with the autumnal appeal of a comfy chair freshly warmed up by anthropoid butt (mine) ... to the two royals, Dan the Burmese and Josie the Tonkinese, who do pretty much like your two starting in Nov. and continuing til late April.

Annti, maybe Scott would be willing to post your pic of Pookie and Simon. Love to see 'em - not to mention that COUCH.

Well, gimme a little while to find it (I have more fucking pictures on here than the law oughta allow; half are un-cropped, un-shrunken raw photo materials, whilst the the other half are utterly-disorganized giant mounds of scanned-in old Kodak Brownie pix, followed by half-assed and utterly-ignorant attempts @ a Pentax K-1000.) I know that it's in there, SOMEWHERE, it's the locating it that's the bitch.

I'll find it, I promise. And if I can find a picture of our dearly-beloved, recently-departed Bubbe Boy, snuggled-down wif his little sister Biddy, I'll send that too. If there was an a way that I could've EVER have snuck-up upon Herr Boy without his supersonic hearing blowing the surprise, (esp. when they were supposed to be COMATOSE from that Vic Tayback-style SNORING!!!) belieeeeve me, he'd have been immortalized as Sissy's favorite squishy-pillow by now.

All that silliness aside, I promise to do all that I can, in between Dr. visits, to find those pix for y'all. And thank you very much for the kindness and huge hearts to think of asking me to post 'em. With the month (week, year, millennium, past seventeen lives...!!!) that *I've* had, y'all really did my heart good, I hope that y'all know how much I appreciate the gesture and the love behind it.